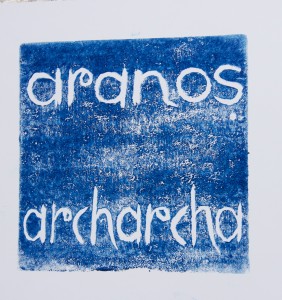 I did fend off bird feet.

including all thieves of caval

The fact that Aranos’s latest album was recorded live at Prague’s Archa theater earlier this year is pretty irrelevant, aside from the surprise that one man with a violin is able to conjure up such an unholy cacophony on a stage by himself.  Instead, Archarcha is far more notable for being the formal debut of a particularly violent and difficult new long-form piece, the 30-minute “Concerto No. 42 for Violin and HD.”  Bizarrely, the album also works as a kind of a perversely effective career retrospective, despite the fact that only one of the four pieces has ever been released before.
Archarcha consists of four lengthy pieces that each explore a different facet of Aranos’ lengthy and constantly shifting evolution.  Naturally, given the eccentricity of his muse, such an undertaking is necessarily incomplete: there aren’t any conspicuously electronic textures, for example.  Nevertheless, quite a bit of ground is covered and Aranos seems equally adept throughout at lurching, deranged cabaret, quasi-Buddhist ritual music and the many odd places in between.
The album opens with a shimmering and absolutely beautiful wood flute-based ambient piece entitled “Flight of the Dung Beetle,” which seems like gentler take on the Tibetan-influenced work on 2008’s Samadhi (no singing bowls this time around).  It is actually a fairly richly meaningful and appropriate title too, though I initially thought it was merely an impish allusion to “Flight of the Bumblebee.”  Dung beetles spend their lives digging through shit and actually fight with other dung beetles over it, but the Scarab varieties were considered a sacred symbol of transformation in early Egypt, so there are some deep metaphors to sift through for those inclined towards such things.  Aranos keeps the Zen Drone-Lord reverie going for the next piece as well, breaking out his violin for 20 minutes of mesmerizing bowed and plucked perfection after a brief vocal interlude.  Aranos’ more drone-themed work is definitely my favorite phase of his career and this is some of his best.
The album’s serene and heavenly first half comes to a very abrupt and brutal end, however, with the beginning of the aforementioned “Concerto No.42 for Violin and HD.”  The primary motifs of the piece are violently sawed and pitch-shifted violins, echoing sinister squeals and creaks, and deep throbbing and shuddering, but it shifts quite a bit of the course of its viscerally unfolding nightmare.  Of course, it never shifts into anything that is not uncomfortable, dissonant, or disturbing though–at least not until the end, where it becomes a kind of lumbering tango.  I am pretty conflicted about the piece as a whole, as it is an undeniably imaginative, virtuosic, and awesome tour de force, but it is so overwhelming and jarring that I am in no hurry to experience it again anytime soon.  I felt the same way about Lars von Trier’s Dancer In the Dark too, so I guess Aranos is at least in good company.
Amusingly, the set concludes with an Aranos classic from 1999’s Making Love in Small Spaces, the off-kilter “pop” of “Beams of Sunshine.”  It feels kind of like he finished playing “Concerto,” squinted at the audience through the glare of the spotlights and exclaimed “Wow- you guys are still here?  Hmmm…. I guess I’ll play something you know then.”  I have never personally appreciated Aranos’s vocal pieces as much as his abstract work, but in this context it makes a refreshing and palate-cleansing end to a very strong set, easing the jangled nerves of the brave souls who made it that far.  Archarcha is probably the most condensed representation of Aranos’s skewed brilliance that I have yet heard, so anyone curious about him would be well-served to start here–a person would have to be either deaf or dead inside not to appreciate at least “Flight of the Dung Beetle.”   It may get pretty snarling and harrowing at times, but this is definitely one of the absolute highlights of the Aranos oeuvre.