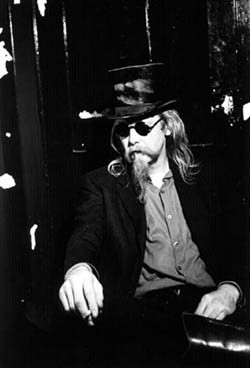 Steven Peter Stapleton was born February 3rd, 1957, in Finchley, London, England. Stapleton is the only constant member of experimental improv outfit Nurse With Wound. He is often seen as one of the pioneers of the British industrial music scene, alongside bands such as Throbbing Gristle, Coil and Psychic TV, although in his music he has explored a wide range of styles, including free-form improvisation, krautrock, folk, and even Latin American dance rhythms.

Nurse With Wound, originally a three-piece ensemble, is Stapletons main outlet for his musical work, occasionally in collaboration with other musicians such as Foetus or William Bennett (Whitehouse). He has also appeared on records by other artists and worked as a producer.

He runs the United Dairies record label, which apart from the NWW output released records by Current 93, The Lemon Kittens, Volcano the Bear, some Krautrock and several experimental artists.

Stapleton is also a graphic artist and painter, and has designed book covers and album sleeves, among which Coil's 'Love's Secret Domain'.

Stapleton lives together with Diana Rogerson, who has also recorded for United Dairies and made a film for which Stapleton and composer Geoff Cox provided a soundtrack, and their four children. The family currently resides in County Clare, Ireland, on a piece of land with houses and caravans hand-built and decorated by Stapleton.